Additional 17 patients were evaluated in both states. Hamilton Rating Scale for Depression and Young Mania Rating Scale were used and blood samples were obtained from new admitted patients. Higher creatine kinase level was found in the manic patients compared with the depressed ones.

Likewise, the creatine kinase level was higher in the manic phase than in the depressive one, when tested within the same patient. 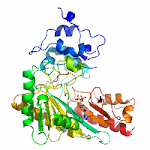